NYT Opinion: The Primaries Are Just Dumb: There’s a better way to do democracy. 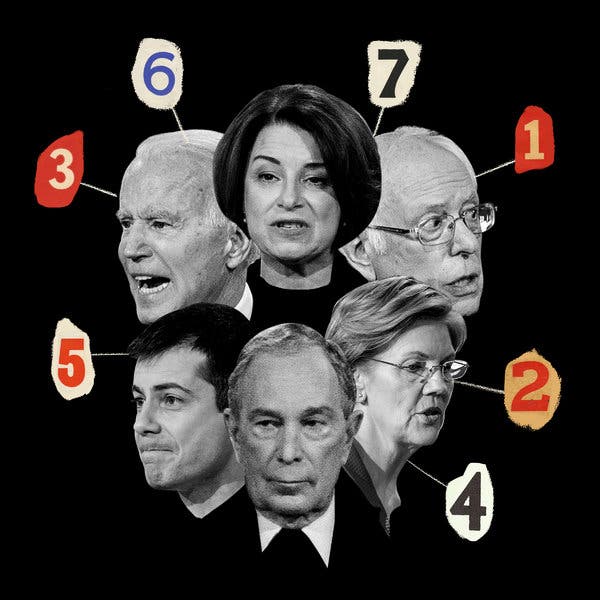 How fitting that Twitter — a social media platform apparently built for bickering — co-sponsored a political debate on Tuesday night that often descended into an unintelligible screaming match among too many candidates whose differences belie a vast common ground.

Any one of the candidates in the Democratic race would be among the most progressive leaders ever elected to the White House, so common sense suggests that a few contenders bow out, to clarify the choice and ensure that a consensus nominee can emerge. That would be welcome. But disarray has a way of keeping even the slimmest of hopes alive.

As the country learned in 2016 with Republicans, the primaries and caucuses are a mess, giving the illusion of a choice in a situation where in fact voters have just the opposite — no clear choice. This year, Bernie Sanders won close to a majority in Nevada, but in the two earlier contests, in Iowa and New Hampshire, no candidate won more than 26 percent of the vote. This fragmentation helps those candidates with passionate followings, like Mr. Sanders, as it helped Donald Trump in 2016, but it produces nothing like a consensus candidate. Mr. Sanders has won only 2.3 percent of the 1,991 delegates needed to secure the nomination, yet he’s widely considered the front-runner.

Single-winner elections do a poor job of winnowing a large field of candidates down to one who reflects majority agreement, and encourage the type of nastiness we’re seeing now, because it’s all-or-nothing for each candidate. And the winner of this process can be the choice of as little as 25 or 30 percent of the electorate, which is another way of saying that he or she was not the choice of up to three-quarters of voters.

This is no way to pick the person who will challenge a president — one who was himself nominated first by a minority within his party, then elected by a minority nationwide.

There is a straightforward and elegant solution: ranked-choice voting, also known as instant-runoff voting. Already in use all over the world and in cities and towns across the United States, it’s a popular and proven way of electing leaders who are — what a radical notion! — actually supported by most voters. It is effective in any multicandidate race, but it’s ideal for making sense of a large and fractured pool of candidates.

How would ranked-choice voting work in primaries with many candidates? We’ll find out this year, when four states are using it for the first time: Wyoming, Alaska, Hawaii and Kansas. As in all other Democratic primaries, they will award delegates proportionally to candidates who win at least 15 percent of the vote. But rather than simply eliminate any candidates who don’t reach that threshold, the ballots listing those candidates first will be transferred to their second-place choices, a process that will be repeated until all remaining candidates have at least 15 percent support.

Say a Wyoming voter is partial to Elizabeth Warren, but feels she doesn’t have much of a chance at hitting 15 percent. He could list Ms. Warren first and, perhaps, Mr. Sanders second. If Ms. Warren fails to get 15 percent of first-place votes in the first round, but Mr. Sanders does, that voter’s ballot would be transferred to him. Millions of votes in the Democratic primaries this year will be cast for candidates who don’t reach the 15-percent cutoff; adopting ranked-choice nationwide would make those votes count for delegates, and thus include those voters in the Democrats’ choice of their nominee.

The candidates respond in turn, by behaving more civilly and reaching out to voters beyond their own base. Running a negative, divisive campaign may pay off in a head-to-head (-to-head-to-head, etc.) election, but not in a ranked-choice one, where victory can depend on appealing not just to a core of supporters, but also to voters who might not be inclined to pick the civil candidate first.

Consider what happened in Maine’s Second Congressional District in the 2018 midterms. Maine first adopted ranked-choice voting in 2016 for its statewide and congressional primaries and elections, and it was popular enough that the Legislature expanded it in 2019 to include presidential elections.

The Second District race featured the Republican incumbent, Bruce Poliquin; his Democratic challenger, Jared Golden; and two independent candidates. After the first round of ballot counting, Mr. Poliquin held a small lead over Mr. Golden, 46.3 percent to 45.6 percent. The independent candidates combined to win about 8 percent, and when they were eliminated in the second and third rounds, more of their votes transferred to Mr. Golden, who ultimately won with more than 50 percent of the vote — even though he won fewer first-choice rankings than Mr. Poliquin. In contrast to Mr. Poliquin, who had publicly dismissed the independent candidates, Mr. Golden reached out to them, and thus won over their supporters. Republicans cried foul, but the voters ended up with a congressional representative who was actually representative.

Maine is the only state to have used ranked-choice statewide, but the reform has been catching on everywhere, from California, Minnesota and Colorado to Utah, Massachusetts and Maryland. Last year, voters in New York City overwhelmingly approved ranked-choice voting for their mayoral, City Council and special elections and primaries starting in 2021 — the largest jurisdiction in the country, by far, to try it.

In fact, some Democrats have already used ranked-choice this season: early voters in the Nevada caucuses. Caucuses offer a form of ranked-choice voting, because voters gather in groups to support their first-choice candidates, and those whose candidates do not receive enough support then redistribute themselves to other candidates. The problem is that many people can’t afford to spend hours at a caucus site, either because of disability or work or family obligations. Voting early by ranked-choice ballot allowed more than 70,000 Nevadans to register their preference for multiple candidates, as though they were at their caucus.

How voters cast their primary ballots is one big area for reform. When they do so is another.

Right now, the primary calendar is cracking under the weight of its own anachronisms. Iowa and New Hampshire, two of the smallest and least diverse states, get outsize attention every presidential election year from the candidates, and therefore have power in determining the arc of the race, long before a vast majority of voters have weighed in. A better system would group state primaries in bunches, making sure to include a diversity of size, geography and demographics in each group, and rotating which group goes first every four years.

No democracy can long maintain its legitimacy with open-ended minority rule. Neither can political parties. Reforming the primary system would go a long way toward making televised shouting matches curious relics of a dysfunctional age.