What Is Ranked-Choice Voting? Here’s How It Works

Voting in Maine will look a little different this year.

Mainers are among the roughly 10 million voting-age adults living in an area that uses, or has adopted and will soon use, a method known as “ranked-choice voting” (RCV). In November, Maine is set to become the first state to use the method in a general presidential election, with more likely to follow.

Teen Vogue took a look at the potential future of America’s ballots, and what that might mean for voters and candidates alike.

What is ranked-choice voting?

RCV enables voters to rank candidates in order of preference. If a single candidate is ranked as the first choice for more than half of voters, they are declared the winner of the election, just as with more traditional winner-take-all voting methods.

Things change when a single candidate fails to be the first choice for more than 50% of voters. At that point, the candidate who received the fewest number of first-choice votes is eliminated. The voters who indicated the now-eliminated candidate as their first choice then have their votes directed to the candidate they designated as their second choice. This “instant run-off” process continues until a candidate has secured a majority of the votes and can be declared the winner.

For a visual representation of what this process looks like, check out this video from FairVote, a nonpartisan organization dedicated to voting reform, and one of the leading entities working to expand RCV.

Where is RCV already instituted in the U.S.?

According to FairVote, 18 cities across the country, including San Francisco, Minneapolis, and Santa Fe, currently use a form of RCV for all or some municipal elections, and in 2016, Maine became the first state to vote to adopt ranked-choice voting for state primaries and congressional elections. Later, a special session of the Maine legislature voted to expand the method to the general presidential election.

This year, Alaska, Hawaii, Kansas, and Wyoming used RCV in the 2020 Democratic primary, and Nevada used RCV for early voters in the Democratic caucus. An additional five states use ranked-choice voting for some or all overseas and military voters. And that’s just in the United States.

Why are elections experts in favor of RCV?

Voters have more of a voice

Winner-take-all voting methods award the candidate who receives the highest number of votes, but not necessarily a majority. In 2009, Chris Christie became governor of New Jersey with 48.4% of the vote; Democrat Andrew Gillum lost his high-profile 2018 Florida gubernatorial run to his Republican opponent 49.2% to 49.6%; and in Maine, nine of the state’s 11 governor races between 1994 and 2014 were won with a less than 50% majority.

According to Represent Women, a nonpartisan nonprofit with a mission to increase representation for women through barrier-breaking voting reforms, in an election with three or more candidates, as many as almost 67% of voters may find themselves having voted against the race’s winner. Jake Auchincloss, who is considered likely to replace Rep. Joe Kennedy III in Congress this fall, was one of nine candidates in his recent Massachusetts primary, which he won with just 22.4% of the vote.

RCV “is giving all voters more of a voice in the system” Deb Otis, senior research analyst at FairVote, tells Teen Vogue. “[This] allows for more voices in the conversation and it gives voters the power to vote for our favorite candidates and then truly elect folks that represent our views.”

It puts more women and people of color in office

There’s also data that shows RCV not only puts more voices into the conversation but elects more diverse candidates. A 2020 report released by Represent Women found that women have won 45% of all municipal elections between 2010 and 2019 in the 19 cities and counties that have adopted RCV for municipal elections. As of this April, 46% of all mayoral seats and 49% of city council seats decided by RCV are held by women.

An April 2018 study compiled by FairVote also demonstrated strong evidence that RCV improves racial diversity among officeholders. Looking at the four Bay Area cities, including San Francisco and Oakland, where RCV (referred to there as “alternative vote”) was adopted in 2000, FairVote found candidates of color won 62% of races after the implementation of RCV, compared with 38% prior to its implementation. This effect has been particularly true for women of color: Between 1995 and 2014, the chances for women of color to win an election in cities without RCV dropped from 19.2% to 6.6%, while in cities with RCV, their chances of winning increased by 20.4% to 21.6% over the same period.

Part of the reason RCV benefits women and people of color seeking elected office is that it eliminates the issue of vote splitting. Vote splitting occurs when ideologically similar candidates run in the same election and divide votes, enabling a third candidate to consolidate the remaining votes. Often, Otis points out, this phenomenon has the effect of pushing women, people of color, and other diverse candidates to the sidelines of elections.

Consider when Elizabeth Warren was accused of splitting the progressive vote between herself and Bernie Sanders after Super Tuesday, or when Amy Klobuchar and Pete Buttigieg, a young, LGBTQ Washington outsider, dropped out of the 2020 race and swiftly endorsed Joe Biden's campaign. In a winner-take-all system, says Otis, “individuals who are outside of the current mainstream...they're basically told, ‘Sit down and wait your turn.’"

“It’s pretty powerful,” she says of the effect ranked-choice voting has on election results. 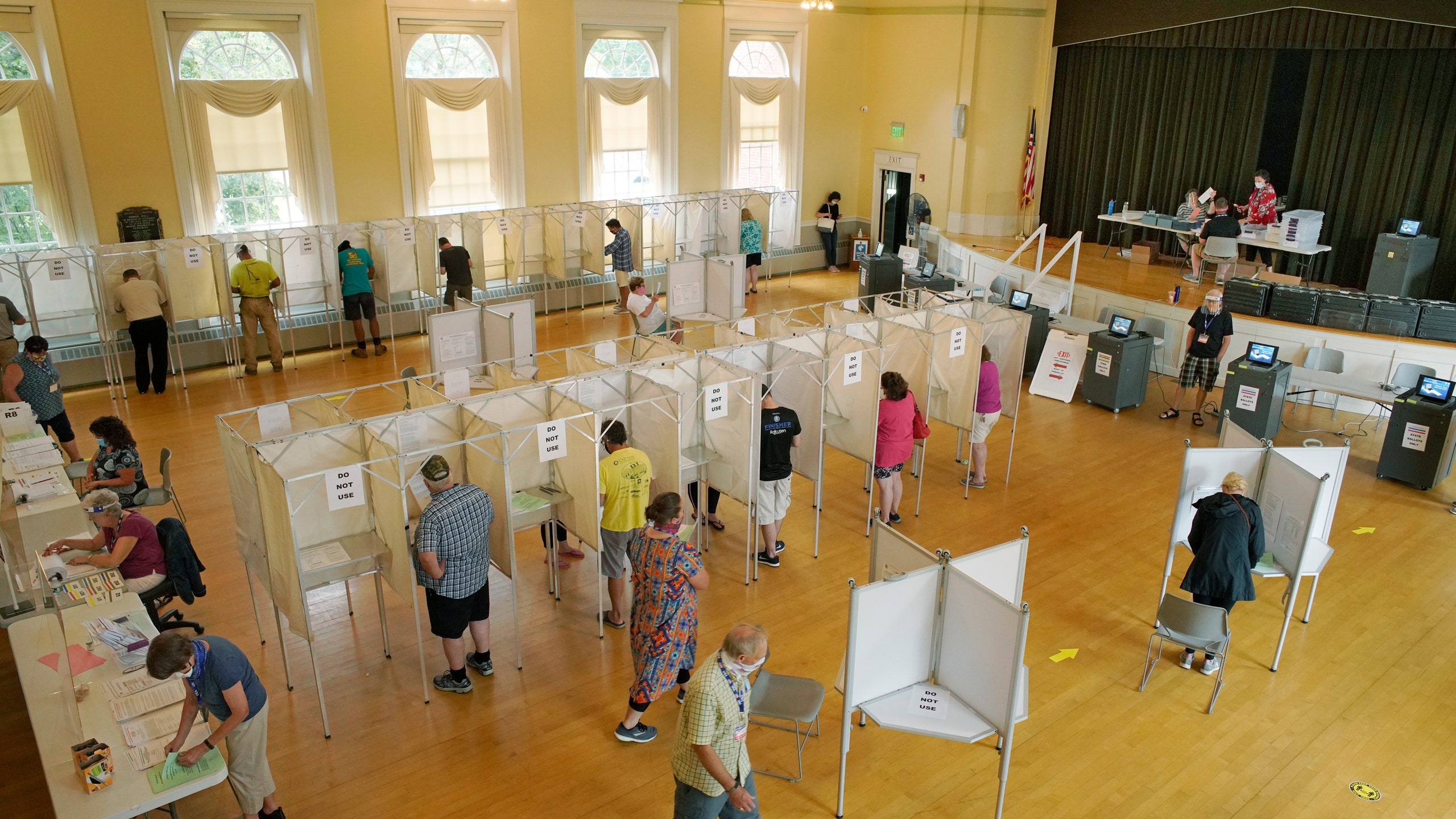 In 2020, it’s hard to imagine much of anything that could make political discourse more civil, but ranked-choice voting could be the key. In some cases, this can change campaign dynamics so significantly that candidates even decide to pair up and encourage supporters to select each as their first and second choice. Because voters are not forced to make a decision for one candidate and one candidate alone, politicians are less inclined to engage in the divisive mudslinging that’s become the norm in politics today.

Some politicians in cities with RCV have also reported being less criticized than their counterparts running for office in races without RCV, according to a 2014 FairVote report. In one survey within the report, just 21% reported having negatively portrayed an opponent, as opposed to 37% in non-RCV races; and only 29% reported being negatively portrayed by an opponent, as opposed to 40%.

These findings are especially valuable for female candidates, who have been shown to be more vulnerable to political attacks. And voters are taking notice. The 2014 FairVote report found that 33% of voters in cities with RCV reported being “very” satisfied with a campaign, compared with 23% of voters without RCV.

What are the possible downsides?

Republicans have been particularly hostile toward ranked-choice voting. Members of the GOP in Maine mounted an unsuccessful campaign to force a referendum on the state’s RCV law, and the influential right-wing think tank the Heritage Foundation currently has an entire page on its website devoted to “Why Ranked Choice Voting Is a Bad Idea,” calling it a “scheme” that will let “so-called reformers...change process rules so they can manipulate election outcomes to obtain power.”

But ranked-choice voting also has its critics among Democrats. Last year, California governor Gavin Newsom vetoed a bill to allow ranked choice throughout the state, calling it an “experiment” that “has often led to voter confusion.” RCV may see voters make different errors than they might on a winner-take-all ballot, according to FairVote, but those errors occur at rates similar to non-RCV, which suggests people aren’t more confused by the process of ranking their votes but need great voter education overall.

In November 2019, the Black, Latino, and Asian Caucus of the overwhelmingly Democratic New York City Council came out against a measure to adopt RCV for municipal primaries and special elections over concerns that it could undermine voters of color, despite the endorsement of several caucus members. The measure ultimately passed.

“Certain groups in the U.S. are rightfully skeptical of any change to the way that we vote…. It's natural that folks want to take a step back, examine all of the evidence” says Otis. “Luckily, in the case of RCV...we do have the evidence showing that it is working in practice.”

What’s next for RCV?

Thanks to Maine, RCV is one of many things about the 2020 election set to make history. The future of RCV will also be on the ballot in Massachusetts and Alaska, as voters in both states weigh in on measures to expand ranked-choice voting statewide.

In addition to New York City, which will introduce RCV in 2021, four additional cities and counties will implement RCV between 2020 and 2022, and over a dozen states have had RCV legislation introduced or passed during the current legislative session, according to FairVote.

RCV “can open the door to elections that more fairly represent the electorate,” Elizabeth Warren and Rep. Jamie Raskin wrote in a recent op-ed for The Boston Globe. In 2019, Raskin, along with other House Democrats, introduced the “Ranked Choice Voting Act” in Congress to require all senators and members of Congress to be elected through RCV. “To defend our democracy,” Warren and Raskin wrote in their op-ed, “we need to fortify it.”